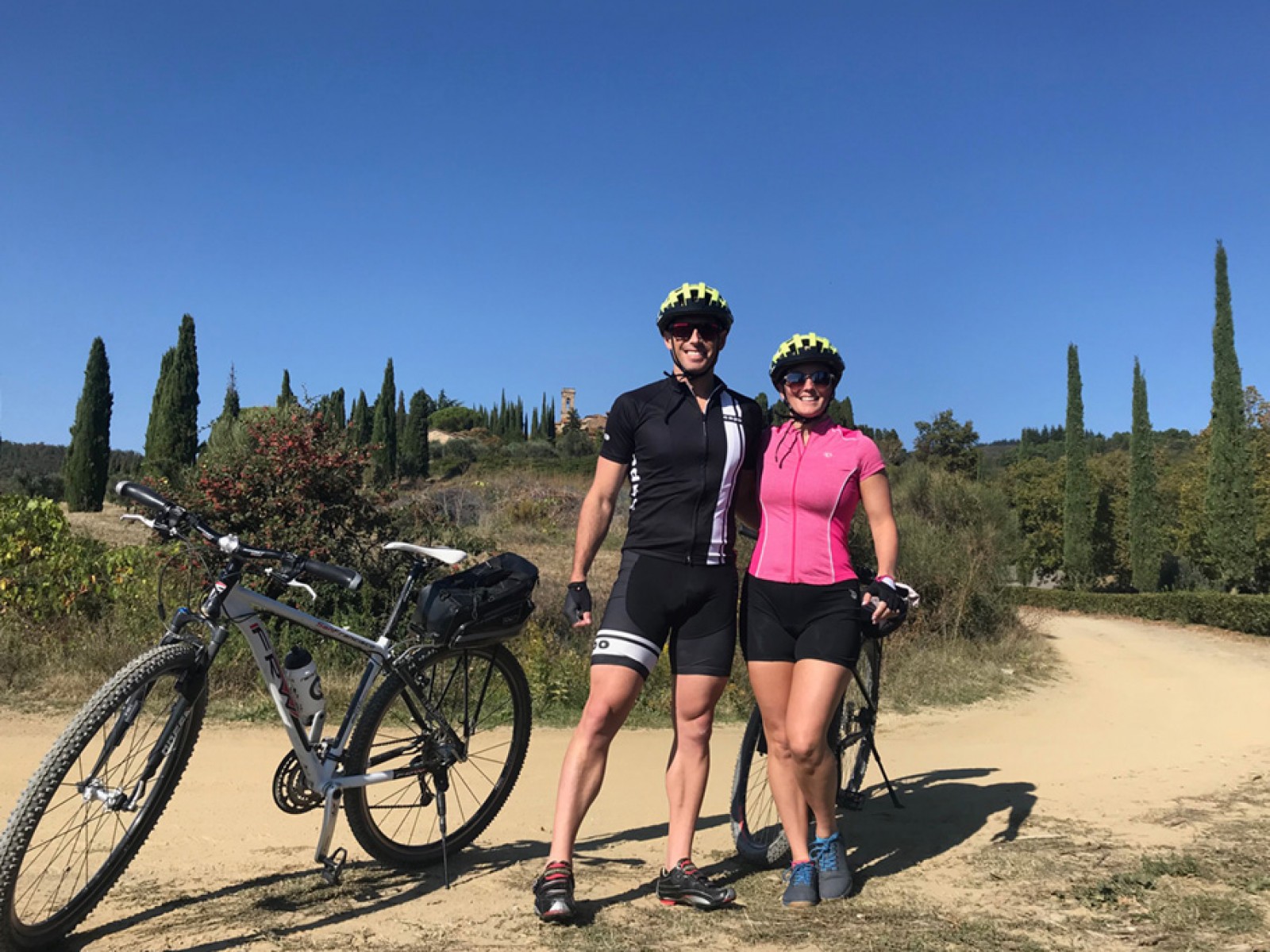 The excursions start and finish at Greve, the little town which is the "capital" of Chianti. Its charming, irregular central square, Piazza Mercatale, is enclosed by loggias where once produce was gathered ready for sale and now is lined with speciality shops.

There are frequent fairs and exhibitions in the square, including an annual autumn wine festival. A statue of Verrazzano stands in the square. Born in Greve, the famous navigator was the first European to sight what was to become New York.

This itinerary is considered difficult for its length and for the quality of the road bed. It is mostly dirt and uphill. It is possible to encounter muddy stretches at Km 31 and Km 32 which could force the rider to walk those patches. Several kilometres of this itinerary form part of the Chianti Extreme bike race.

If you prefer to ride more on bitumen, you could continue on straight from the Badiaccia a Montemuro as far as Torsoli, turn left for S. Michele and then follow directions down to Greve.

Having written of the difficulties, we wish to add the scenery during this itinerary is beautiful, often wild; one rides as far as the southern limit of the Florentine zone of Chianti and to the summit of Monte S. Michele from where the panorama extends for kilometres across the hills. In the woods, before arriving at Badiaccia a Montemuro, you will see Dogole, the long abandoned hamlet and mill. If you wish to stop for a break we recommend the Monte S. Michele woods where the locals often picnic in summer.

Near the Villa San Michele complex near the summit there are two restored spring fountains, del Barbiere and del Lavatoio. Villa San Michele has a bar, restaurant and rooms for rent and a hostel. For information: [email protected]

Departing from the square in Greve, take the SS 222 (known as "the Chiantigiana"), direction Panzano. (bitumen / varying terrain)

Turn off on the right following the sign for Vitigliano. (dirt / uphill)

Poggio al Sodo. Take the road to the right. 200 metres further on veer to the left, direction Volpaia. (dirt / flat)

Volpaia is a fortified medieval village whose elliptical walls are partly destroyed. The most important building is the Commenda di S. Eufrosino, established in 1443 by bequest of ser Piero della Volpaia. One can see the fortification's main tower and a smaller tower. The cylindrical tower on the north side is a later addition. When Siena finally fell in 1555, Volpaia was no longer required for defense purposes and it transformed into an agricultural village. (bitumen / downhill)

Continue on in the direction for Radda in Chianti. Turn left at the next 2 intersections. (bitumen / uphill)

Fattoria di Pian d'Albola. All that remains today of this antique fort is the turret and the village which developed around the castle. In 1551 there were 126 inhabitants here. Today the vineyard is one of the most renowned producers of Chianti Classico. Continue straight on. (dirt, bitumen / varying terrain)

Badiaccio a Montemuro. Monks of the Camaldoli order founded a monastery here in the C 11th which united with the Benedictine monastery near Florence in the C 16th. Only a few traces of the monastery remain today. Approximately 300m further on, on top of a hill look on the left for the CAI 00 track. Turn onto the track and continue straight on, passing by a track on the right. (bitumen, dirt / uphill)

Ride straight ahead at first junction. Turn right at next junction; and then continue straight on at the following junction. (pathway / uphill)

San Michele church is built at the top of Mt. San Michele, the highest peak in the Chianti mountain chain. It was built by an order of Vallombroso monks around the year 1000 and was inhabited until 1616. All that is left of the original building are the altar wall and part of the two side walls.

Every year, on Ascension Day, lovers celebrate the rite of the "broom knot", going into the woods where the heavily scented, yellow broom flowers are in bloom and, uniting two of the plants, pledge eternal love. Continue on, passing several secondary roads on the left. (dirt / varying terrain)

Continue straight on at the junction (dirt, bitumen / downhill)

After the pleasant ride down from Monte S. Michele you arrive back in Greve.